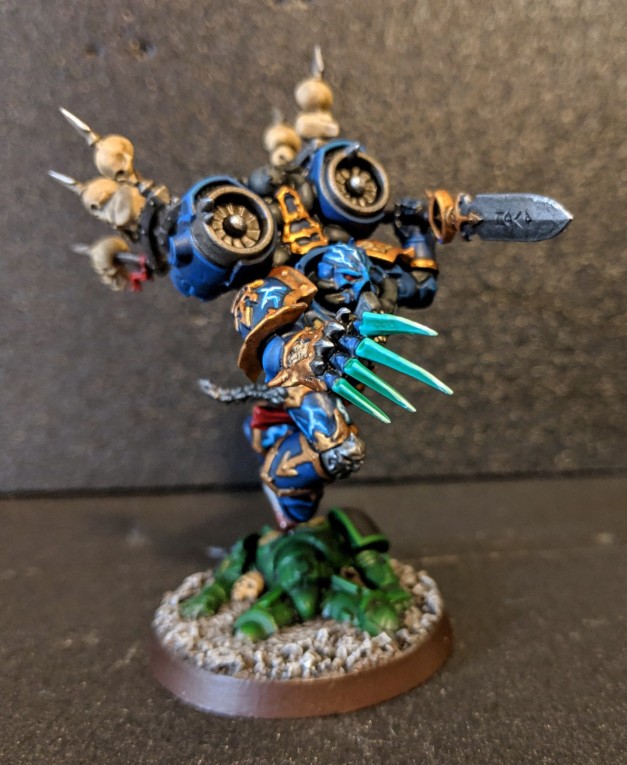 I’ve had less time for hobbying lately, as spring always brings out extra chores and obligations that keep me away from my workbench. But I’ve been puttering away recently on some reinforcements for the Oath of Midnight, my Night Lords 40k warband. I painted them several years ago and recently went back and redid the lightning bolts detailing on many of the infantry troopers. After that cathartic experience, I pulled a couple models off my shelf to paint up and add to the army.

First up was a model that I had coveted for many years: the Night Lords Dreadnought from Forge World. Long out of print, this model was one of several dreadnought designs for specific Chaos Space Marine legions. It’s a bit pricey these days, but I was able to snag one on eBay for a reasonable price a few months back.

Paul was good enough to lay down a rich blue base coat using his airbrush. Once I got started on this model, I realized that it’s really quite simple. Just armor, trim, weapons and some details. I think I spent more time on the freehand lightning bolts than I did painting the armor plates and trim. I’d say it has nowhere near the level of detail as the Helbrute model from the Dark Vengeance boxed set, which I painted up a few years ago.

This ironclad behemoth shall henceforth be known as Murdoch Dreadmantle, Ascended Champion of the Night Lords.

Ironically, this is actually the first Forge World model I’ve ever sought out and purchased. I know FW stuff is commonplace nowadays, but back in the day when I started playing 40k, having Forge World models and upgrades in your army was the mark of an advanced hobbyist. How wonderful it is, then, to finally ascend to join their rarefied ranks!

The base is scratchbuilt using a variety of scenic junk. I find that I just love crafting scenic bases to finish off centerpiece models such as this. I’ve used the pre-sculpted scenic bases that come with large kits, and they’re fine, but there’s something really satisfying about doing it yourself.

In addition to the dreadnought, I also painted up a slightly more recent miniature: Haarken Worldclaimer, the new special character from the Vigilus Ablaze sourcebook. 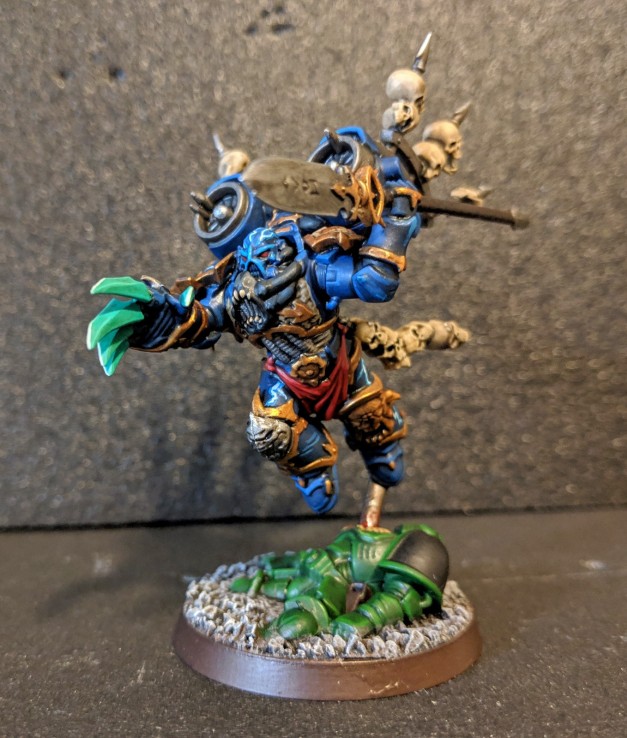 For Night Lords players, Haarken is a bit of a heartbreaking addition to the 40k milieu. We all know he should have been a Night Lords character, and that his Black Legion allegiance feels awkward and forced. Likewise his game abilities seem to steal the spotlight from the VIIIth Legion by focusing on terror tactics featuring Raptors and Warp Talons — why not just make him a Night Lord character? Seems to needlessly muddle the lore to have him be part of the Black Legion.

Anyway, I decided to paint him up in the colors that he wears in his heart: the midnight blue of the Night Lords! I’ll probably fudge his data sheet a little bit and replace all the Black Legion references with Night Lords so he works with my army. I can’t be the only one doing this, right?

This figure is cool and dynamic, but also incredibly fragile. The entire model balances on that pipe sticking out off the dead marine’s chest. And those trophy racks, gagh — it would just take one awkward tumble off the table to snap off the trophy racks and/or the pipe in the base. I’ll enjoy playing with this guy, but I’ll need to be careful and keep him away children and pets.

So those are the newest additions to the Oath of Midnight. It felt good to paint some lightning bolts, I must say. Stay tuned — I’ve got a battle report to share from a big five-player game that took place last weekend. Good stuff inbound!