John and I got together earlier this month to try out the new hotness to come across our collective desk — Saga: Age of Magic, a highly anticipated supplement for the popular Saga ruleset that gives players the tools to recreate all manner of fantasy adventures on the tabletop. It uses the Saga game, about which I’ve heard plenty of good stuff over the years.

Here at Comrade’s Wargames, we’re big fans of medium-sized fantasy games that land somewhere in between small-scale skirmish rulesets and larger mass battle games. Saga: Age of Magic falls right in the middle. The game calls for about 40 figures per side (give or take), and the authors don’t give a fig about which miniatures you use to represent your units. As someone who enjoys collecting and painting figures from a variety of game lines and manufacturers, that’s music to my ears.

This was to be my first game of Saga, and John’s second. We met up at Just-A-Game-Con, a local gaming convention in Corvallis, and set up our game on a spare table in the main gaming hall.

I brought my undead army, which fit nicely into the Age of Magic using the “Undead Legions” battle board. (More on that in a moment.) John brought his human empire, which used the Great Kingdoms battle board.

John also had Saga: Age of Battles, which is a supplement designed specifically to help organize your games. It has rules for terrain selection, deployment, turn length, and other special rules. I believe it was written to provide a framework for tournament play (something that, shockingly, Saga seems to do well) but we decided to try it out for our casual pick-up game.

We set up the battlefield using John’s nifty custom mat (3×4 feet, the recommended size for Saga) and some of my terrain. Then we rolled randomly to determine the scenario and special rules and ended up with a meeting encounter on a bleak moor, where a thick blanket of fog or mist covers the battlefield and severely limits ranged combat and charge distances — but only for the first three turns!

We also rolled randomly for our deployment and settled on each army deploying in a tight semicircle on opposite table edges.

From a narrative standpoint, we set this game in Realmlight, an “undiscovered continent” in our home brew fantasy setting. We know there’s an undead army lurking in the frozen northlands of Realmlight, so this game became a chance meeting between a contingent of explorers pushing into the unexplored frontiers…literally into the mist-shrouded hinterlands. And — oops — they found something. Or rather, something found them.

Here’s a look at our deployment at the outset, starting with my undead.

I had a big mob of 20 Mindless in the center, backed up by 2 squads of 8 skeleton warriors each, followed by a fast-moving squad of 6 mounted hearthguard, plus 3 creatures and a necromancer. It felt like I was dabbling in a little bit of everything from the Undead Legions list.

John’s army featured a core of hearthguard backed up by warriors and levies, supported by 2 wizards, a captain, and a warlord. He had a lot of overlapping buffs and abilities.

With deployment sorted, we got into the meat of the game.

Saga is a really innovative ruleset that combines old-school strategies and tactics with new-school concepts of resource management. Each army uses the same basic array of units along with a custom battle board for each fantasy faction. The battle board includes a number of special abilities that are unique to that faction and serve to push certain play styles or tactics. For example, the Undead Legions has an ability called “Howling Pack” that represents the undead hordes surging forward in combat, whereas the Great Kingdoms battle board relies on abilities like “Banish the Darkness,” to push back opposing units. The battle boards bring a lot of flavor to the game, and you can instantly differentiate between each faction by glancing over their battle board.

Anyway, each turn players generate a pool of resources (using dice) that can be used to activate abilities on their battle boards.

The variable nature of this resource system means you never know for sure which abilities you can activate each turn, so a big part of the game involves carefully allocating your resources at the outset of your turn to (hopefully) pull off a brilliant tactical maneuver on the battlefield. Or not! Sometimes, the dice have other ideas.

Our game featured a little bit of everything: rampaging undead, spellslinging wizards, hardened hearthguard, and plenty of uncooperative dice. Rather than give you a blow-by-blow, I’ll point out a few of the high points from the game.

My undead army mobilized much faster than John had expected, thanks to a couple quirky abilities in my battle board and a singular spell (Rush) that could be used to help another unit activate and move again. My Mindless mob only moved 4 inches per activation, but they could easily activate two or three times per turn, which meant they were in John’s face soon enough. 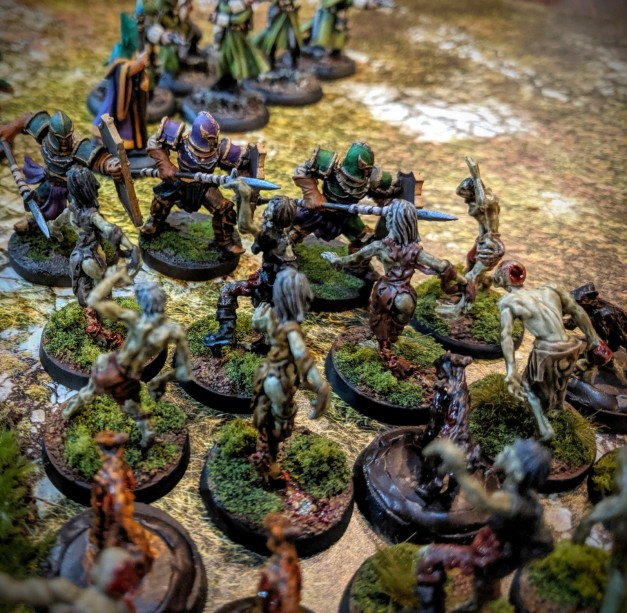 Unfortunately, they opted to charge the wrong unit — John’s hearthguard! These guys are the equivalent of veterans in Saga and are typically the most potent infantry unit in most situations. I threw my zombie horde against them time and time again (three times in one turn, actually!) and they just kept hanging on. I caused a couple of casualties but I wasn’t getting decisive results.

Luckily Saga includes an ability called fatigue, in which units slowly accumulate fatigue points as they do stuff on the battlefield. The game’s most singularly brilliant mechanic allows the opposing player to “spend” a unit’s fatigue to give penalties or, in extreme cases, cancel their attack entirely! Fatigue is a really nifty mechanic and it constantly keeps both players on their toes. Do I charge with my warriors knowing they’ll gain fatigue later in the turn? Do I burn your cavalry’s fatigue to reduce their charge distance so they can’t reach my wizard?

Anyway, my unit of Mindless continued chewing on John’s hearthguard while he slowly moved his warriors and levies up to support them. He had to be careful not to get too close, though, because I had a unit of mounted hearthguard ready to pounce from afar if he strayed.

John’s two wizards were effective at keeping my army at arm’s length. Being forced to withdraw is not what a shuffling band of blood-mad zombies wants. I was spending my precious Saga dice repositioning my Mindless in response to his spells and other effects, which meant that I didn’t have enough mobility remaining to bring my skeleton warriors and creatures to bear on the problem.

The Undead Legions battle board has a couple of key abilities that let you regenerate slain zombies or warriors. Both abilities give the undead some real staying power, particularly in the late game when the opposing player is starting to feel some losses. I used my regeneration abilities to fairly decent effect throughout the game to keep my Mindless dangerous until the end.

We called the game on turn 4, shortly after the fog lifted and ranged combat became more effective. We counted up victory points (“massacre points” in this scenario) and found that John had won handily. The key (mis)play was probably when I charged my mounted hearthguard into his squad of black powder pistoleers. They were decimated by the gunfire and only lasted one more turn before they were destroyed outright. This gave John a big pile of massacre points and definitely tipped the scales in his favor.

But we decided it was a draw from a narrative standpoint. The explorers’ vanguard, having unwisely blundered into an undead scouting party on the mist-shrouded moors, chose to withdraw and lick their wounds. Meanwhile the undead contingent retired to its glowing blue stone archway and resumed whatever nefarious ritual they had been unspooling when they were so rudely interrupted. 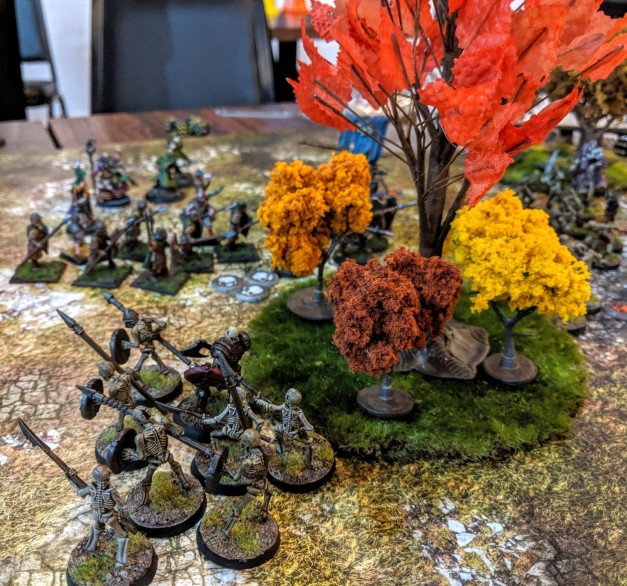 Overall, Saga: Age of Magic was a ton of fun. I pretty much instantly picked up the core concepts of the game — activation, saga abilities, magic, combat, etc. I made a few mistakes and we engaged in a bit of rulebook-flipping, but overall the game was exceedingly tight and well written. I feel like I only scratched the surface of the game’s potential, though. Afterward, I found myself rethinking various plays and strategizing how to get the most out of my undead army in future games. Doubtless we’ll play this one again soon!